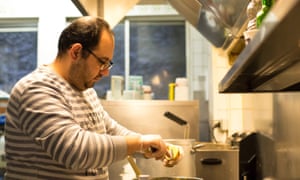 Syrian chef Mohammed has come up with a mouthwatering menu at Strasbourg’s La Ruche restaurant. He and his wife want ‘to show that Syria is more than just war’.

Across Strasbourg, restaurant owners have thrown open their kitchens and invited chefs who have fled Syria, Afghanistan and Tibet to use their ovens and pots and serve their favourite dishes from their homeland to customers.

For the refugee chefs, it is a joyful chance to show off the culture they have left behind. Iman Rahal and her husband Mohammed from Damascus are two of the refugee chefs that joined the festival, and are happy to have the chance to “show that Syria is more than just war”, as Rahal puts it. “I want people to know that we have a great culture and wonderful food.”

The menu they come up with for the La Ruche aux Deux Reines, a Strasbourg restaurant that serves food from all over the world, is tantalisingly mouthwatering; fattoush (a salad with fried bread), fatayer (spinach and cheese pie), kibbeh (bulgur balls) and three delicious desserts. The reaction from customers has been overwhelming; “I had to disappoint about 60 customers,” restaurant owner Vicky Djama says. “There simply isn’t enough space for everybody.”

She loves the idea of the Refugee Food Festival and jumped at the chance to take part. “I see it as an honour,” she says. “I always wanted to know more about Syrian cuisine. But more importantly, we are all concerned about what’s happening in Syria, but we haven’t got a clue when it comes to doing something. For me this is a great opportunity to actually do something: help these refugees to show their talents to the public.”

The festival was the initiative of Parisians Marine Mandrila and Louis Martin, who run an organisation called Food Sweet Food that specialises in forming connections between people through culinary events, books and documentaries.

“The festival has three objectives,” Marine says. ‘First of all, we want to change the way people look at refugees. There are all these negative assumptions. We want to show that they are people like you and me, who have skills and talents and can contribute to society. Secondly, we want to introduce unknown cuisines to the French public. And thirdly, we want to help these refugee chefs to integrate and increase their job opportunities.” The initiative has been supported by the UN refugee agency and the city of Strasbourg.

For Iman and Mohammed the festival is an important occasion to introduce themselves to the public. They set up a little Syrian catering service at home a while ago, but hope to begin a real restaurant and are looking for a financier. “A real restaurant is our dream,” says Iman. “But for now we just hope to make the people who come to the festival very happy.”

She has just heard that her sister, who is still in Syria and has applied for asylum in France, has to wait another three months. “All of our family members are still in Syria, so it’s not going to be a very joyful Christmas for us,” says Mohammed, who used to be an architect and ran a large building company in Syria, but lost everything.

A few blocks away, in an Italian restaurant, chef Massimo Solinas is working with Dorje, a Tibetan refugee who for safety reasons doesn’t want his last name mentioned. The Italian chef has discovered, to his surprise, that Tibetan cuisine has a dish similar to ravioli, called momo. So he is offering his guests a menu that combines Tibetan momos and Italian ravioli.

The flamboyant Italian and the quiet Tibetan make an unusual but successful team. The restaurant telephone hasn’t stopped ringing. “I have decided to organise another Tibetan evening in January,’ Solinas says.

Iman in the La Ruche kitchens.

The customers who have been able to get a table are full of praise. An elderly lady who has come with her husband and three grown children says: “We travelled to India this year where we were introduced to Tibetan food and we really loved it. That was one reason to come. But we are also impressed to eat food that’s cooked by someone who has gone through so much and still has found the strength to share his culture with us.”

“The festival offers us a rare opportunity to taste Tibetan food”, says a young man in the back of the restaurant, who came together with three friends. “We didn’t know what to expect, but we love it.”

“It’s the food from my village,” Dorje explains. “My mother taught me how to fold momos which really is an art in itself. She is a great cook and I can’t tell you how much I miss her. Making momos is a way for me to be with her.” He pauses. “What is so important to me is that this festival offers me the chance to show that we Tibetans have our own culture and cuisine, contrary to what the Chinese would like you to believe.”

“I’m a migrant, just like Dorje,” Solinas says. “That’s something that connects us. Although our reasons were different, we both left our country. So we both know what it is when you live in one country and all of your family lives somewhere else.”

In yet another kitchen in the city, Afghan chef Ahmadzai is working hard in the Vietnamese restaurant Mandala. The initial idea was that he would cook for only one evening but the event attracted so much attention that restaurant owner Frédéric Muller asked him back. The dishes Mandala is serving tonight are a fusion of Asian and Afghan elements.

Ahmadzai is afraid to talk to the press, so Frédéric does the talking. “For me it’s a natural thing to partake in the festival because my wife is Vietnamese and her parents came to France as refugees. Through them I have seen how difficult it is to find your place in a totally alien country.”

Working with Ahmadzai is easy, he says, because the Afghan had already gained experience in a Vietnamese restaurant in Norway. “Refugees can enrich our society, but in the media they are depicted as an invasion. I really want to contradict that lie.”

Asked why the festival attracts so many people, his wife Nicole To says: “People are curious. They want to try out food they have never tasted before. But I also think many people are genuinely concerned about the fate of refugees. And this is a way to show it.”

Later that evening Ahmadzai introduces himself to the customers with a short speech. “I really want to express my gratitude that you have come to eat my food,” he says. And when the guests give him a loud applause, he smiles.

The Refugee Food Festival was in Strasbourg until December 23. This month Food Sweet Food is launching a practical toolkit for people who want to organise a refugee food festival in their own city. For more information email: contact@foodsweetfood.org

Originally reported by the Guardian.

Remember, no issue has a quick fix solution. Thus, always ensure to consult highly knowledgeable group of professionals whom would provide you with a collective advice, never individual advice. This group advice and approach is unique with CWIIL Group and is based on the overall Management Philosophy of all CWIIL Group Companies.

Consulting CWIIL Group of Companies, for any / all investment matters ensures advice based on highest level of knowledge which are given to you by a team of select research-oriented experts whom each will do their own assessment of your matter, and also assess it together, thus ensuring that in case a mistake has been made by one, it will be noticed and corrected even before it is being passed on to you. Receiving incorrect and un-knowledgeable investment advice can be disastrous and thus should be avoided.

CWIIL Group of Companies is a global group of multi-specialised units with diversified interests and activities, wherein each company is a separate legal entity registered under prevailing laws in different parts of the world. CWIIL Group of Companies Products, Services, Project and Solutions are in a multitude of Verticals including, but not limited to, Infrastructure, Power, Oil & Gas, Legal, Media, Technology, ITES, HR, Shipping, Aviation, Real Estate, Hospitals, Health and Medicine, Education, Funding & Investment, Business and Legal Consultancy, and Public Private Partnerships, and other CWIIL Group Units, worldwide, to name a few.

For Further Queries or to Request a Personal Quote Feel Free to Contact :

The Corporate Communications Team would require minimum a fortnight for Reviewing & Responding to Queries, which please note.